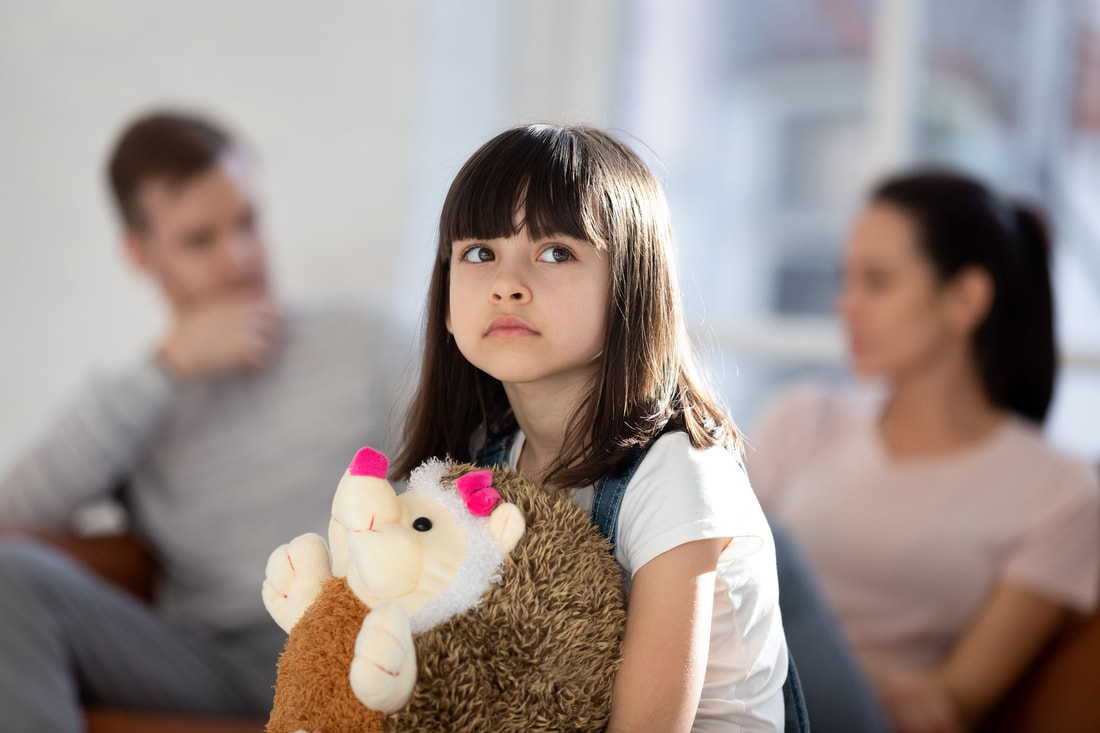 Divorce is no longer seen as a single legal process. It is now recognized as a multidimensional process, with distinct legal, emotional, financial, and religious processes that occur over several years. The choice to divorce rarely happens by mutual consent in families with children. (Henig, 2013).

A child has a right to have a relationship with both parents, and it is normally held by experts that children’s best interests are served when they are able to maintain regular and consistent contact with both parents in a conflict-free environment. But lots of parents and children presently still encounter contact challenges post-separation and/or divorce. It has been shown that contact problems manifest in various forms. The typical thread running through contact difficulties is the adverse effect that it has on the parent-child relationship. As a Family Law Attorney, I have come across a host of fathers and mothers who have been intentionally denied contact with their children, and who have lived through parental alienation.

Contact between parent and child is an essential component of family life and is nearly always in the interests of the child. Contact between parent and child is to be terminated only in exceptional circumstances, where there are cogent reasons for doing so and when there is no alternative. Contact is to be terminated only if it will be damaging to the child’s welfare and best interests.
​
The concept of parental alienation was very first recognised by Wallerstein and Kelly in 1976, but it was Gardner’s statement in 1987 that parental alienation was a syndrome, that is, a mental condition experienced by children who had been alienated by their mothers, that has led to debate over the last 30 odd years. Then again, regardless of an abundance of papers authored by academics, legal and mental health professionals, there is a lack of empirical evidence on the subject.

Alienation can take on many forms:
The Alienating Parent

The alienating parent is often narcissistic or a borderline personality type. Either one is difficult to deal with. The narcissistic parent wants to control the other parent. The borderline personality is overly angry. Both are willing to lie. Parental alienation seems more reflective of child residence agreements, with the resident parent – irrespective of gender - more probably to alienate the child (Beebe and Sailor, 2017). No gender distinctions have been found in the number of alienating strategies used by alienating moms and alienating dads (Baker and Darnall, 2006). Nevertheless, the research evidence indicates that there are gender differences in the alienating techniques used, for example alienating moms are more expected to denigrate dads to the child whilst alienating dads are more likely to promote child defiance towards the mom (Balmer 2017). Alienating parents have been depicted as having narcissistic problems, blaming the alienated parent for their distress and humiliation (Godbout 2012). Studies suggest that alienating parents are psychologically maltreating their kids as they endeavor to form a pathological alliance with the child, lack of empathy for the child and inability to split the child’s needs from their own (Lavadera 2012). Therefore, alienating parents will shape the child’s thoughts and feelings, providing them warmth provided they receive unquestioned loyalty in return.  In many cases, this may possibly also include the parentification of the child, either as the child ends up being a confidant or is relied upon for emotional support.

The Parent who is Alienated

The traits of the child are a significant consideration in parental alienation as not all children are alienated, and for those who do, there are variants in the extent of alienation. Following Gardner (2002), alienation could vary from moderate, which is not sensed to be problematic, to modest and extreme. In moderate cases the child is coached to disrespect, disagree with, and even act out antagonistically towards the targeted parent. As the disorder advances from mild to moderate to severe, this antagonism turns out to be converted and expanded into a campaign of denigration (Gardner, 2002). Both the gender and age seem to be important, with more likely involvement of girls than boys (Darnall, 2006), and older children and younger people who have the cognitive and emotional ability to take part in family dynamics but whose thinking persists malleable (Johnston, 2006). Alienated children have a tendency to show age- inappropriate alliances with the alienated parent (Balmer, Matthewson and Haines, 2017), demonstrating overwhelming polarisation where the alienating parent is sensed idealistically whereas the alienated parent is denigrated (Baker, Burkhard and Albertson-Kelly, 2012). Indeed, there is some evidence that alienated children have personality difficulties, with some developing a mistaken sense of self as a coping strategy for the alienation, which enables them to present as well adapted (Lavadera, 2012).

Research suggests a range of negative long-term effects of parental alienation, and alienation may result to low self-esteem in adulthood and depressive signs and symptoms. Alienated children may possibly have reduced levels of self-sufficiency in the adult years, where it has been hypothesised that the intense alliance amongst the child and alienating parent may negatively affect the child’s later independence. The manipulative nature of this alliance has also been associated to difficulties surrounding attachments and relationships, where the alienated adult may either seek constant approval from partners or display distrust. Nevertheless, there are some studies findings which indicates that older children may seek reunification, occasionally following a pivotal event such as witnessing the alienating parent’s negative behaviours. Additionally, it has been suggested that such reunification can result in the ‘backfire effect’ whereby the child rejects the alienating parent and re-establishes a relationship with the alienated parent.

Often parents and legal practitioners utilize the legal systems to eliminate a parent from a child’s life by means of ex parte applications to alter primary residence orders in defended court cases. The adversarial system is one of the ‘winner-take-all’, driving parents to denigrate each other to demonstrate that they are the better parent and deserving of being awarded primary residence status. High-conflict families often choose lawyers who use an aggressive manner in advocating for their client. Should a lawyer appear too conciliatory, high-conflict clients will look for more aggressive representation, slowing down the resolution of differences and settling on a post-divorce family structure. Many lawyers are intractably wedded to an adversarial stance invariably intensified parental conflict irrespective of the impact on the child in the context of the family.

The adversarial (win or lose) environment of the judicial system offers never ending opportunities for fights in pleadings, subpoenas, depositions, and court appearances; usually engendering more conflict where children become highly polarised when they are questioned by judges and when attorneys decide their best interest. Weinstein (in Johnston, 2009, p. 232) maintains that lawyers contribute to rather than resolve disputes “when they are wedded soley to their advocacy role”. For instance, they may advise their client not to talk to the other spouse, thereby reducing corrective feedback. Additionally, they may caution parents against making any short-term arrangements pertaining to contact, in case they compromise their position, therefore increasing the parent’s resistance to collaborate.

Many lawyers may also advise their client to make extreme demands to increase the bargaining advantage. Others may advise their clients to make several submissions to the court creating allegations, such as neglect, physical abuse or mental incompetence, in order to shed the other parent in a bad light and to win their case. The resultant public shaming, guilt and rage at being so tainted, motivates the other parents’ need to ‘set the record straight’. Johnston and Cambell (1988) contend that few separating parents can recognize that this may come from the toxic practices and procedures endemic to the adversarial system.

Researchers argue that numerous lawyers engaging in these cases lose their professional objectivity as they end up too emotionally engaged with their clients. They contend that many of these lawyers attempt to rescue their clients and take on the fights as their own personal feud, while others get secretly hostile and ambivalent about representing their clients. Many high-conflict divorcing parents have personality disorders and they have the inclination for “forming complex hostile-dependent relations, losing their boundaries, projecting aspects of their own needs and wishes onto others, and acting out their intra-psychic conflicts in the interpersonal world” (Johnston & Cambell, 1988, p. 40).

Inexperienced lawyers may quickly be caught off guard and become enmeshed with these clients. Lawyers who over-identify with their clients may quickly make unwanted applications to court, or they may make unrealistic counter demands.

The courts are frequently ill-equipped to deal with accusations of child abuse and molestation, that are common among high conflict divorcing families. The absence of coordination and cooperation among the different agencies such as the police, the Teddy Bear Clinic, the Child Protection Unit and the judicial system, and the poor training of investigating officers, can result severe emotional damage to children involved, as well as to parent-child relationships. Whist children are exposed to physical examinations and psychological assessments, lots of them go for extended periods of time without contact with a parent, or at best with supervised or restricted contact. Johnston and Cambell (1988, p. 43), point out that “their trust in and sense of safety with the accused parent is severely shaken if not destroyed.”

The question to ask is whether, if the family was intact (still together), would the alleged conduct have been of such magnitude to warrant and justify the child rejecting the parent?