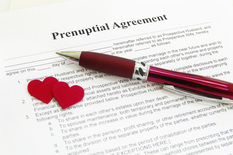 A marriage out of community of property is achieved by drawing up an antenuptial contract (ANC). The ANC will be the most important contract that a married couple will sign in their lifetime. Entered into before marriage, the purpose of the contract is to change some or all of the automatic financial consequences of marriage.

The ANC allows the husband and wife to tailor-make their very own matrimonial property regime. They can include any provisions they like in their ANC, as long as the provisions are not against the law, good morals or the nature of marriage. ANC’s are problematic to change as they dictate the financial and proprietary consequences of the couple’s future and can affect the rights of the couple’s creditors.

Couples may enter into one of two types of ANC:


The ‘accrual’ is the extent to which the husband and wife have become richer by the end of the marriage, in other words, the amount by which the spouses’ joint wealth has increased over the period of the marriage. When married according to the accrual system, each spouse acquires a certain right to the other’s property on divorce. Neither system is superior to the other. The marital property regime chosen (i.e. with or without accrual) must suit the couple’s relationship dynamic and specific needs. Note that the ANC is a normal contract, so all the rules as to fraud, duress and mistake apply.

Only an attorney who is a notary public may execute an ANC. It is important that both parties consult with the notary public beforehand and request an explanation of the various marital regimes, and the implications of each on divorce. It is important to properly understand the implications. In fact, it is desirable that the parties obtain independent and separate legal advice before committing to the terms of an ANC.

Once the ANC has been drafted, both parties and the notary public must sign it in duplicate prior to the marriage. The ANC will then be forwarded to the deeds office in the area where the parties reside to be registered. Registration must be affected within three months of the date it was signed by the notary public. Apart from the usual fees, a prescribed fee is payable to the deeds office upon registration of the contract.

In the event that the ANC is not signed or registered timeously, the couple can approach the High Court in terms of the Deeds Registries Act 47 of 1937 by means of a joint application to grant condonation for the late signing and/or registration of the ANC after the conclusion of the marriage. The application must be made within a reasonable time after it was discovered that the contract was not properly registered. Notice must also be given to the registrar of deeds of the applicant's’ intention to bring such an application.
Register your ANC, click here.