Engagement and the Law 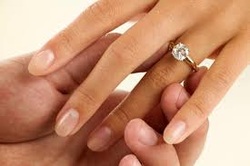 Requirements for an engagement

To enter into an engagement, one must be 18 years of age or older. Minors need the consent of both parents (or guardians), unless certain circumstances are in place or a court order is granted. Mentally ill persons cannot get engaged.

Both parties must voluntarily, of their own free will, consent to the engagement. However, the following conditions can render a consensual engagement voidable.

A material mistake as to the identity of the person you are getting engaged to will render the engagement void.

For example, you are friends on Facebook with a world renowned movie star. He/she sends you a message via Facebook and asks you to get engaged. You are over the moon and accept the offer, only to find out later that it was a fake profile.

Misrepresentations that can render an engagement void include failing to reveal or concealing certain personal qualities, such as impotence, sterility, serious mental illness, and alcohol or drug addiction, where there is a duty to do so.

Misrepresentation is not only committed by positive false representation, but also by failure to correct an existing misconception. An engagement may also be annulled on the grounds of innocent misrepresentation; for example where a man is coaxed into proposing to his girlfriend in the belief that she is pregnant.

Undue influence is also grounds for terminating an engagement.

Getting engaged to someone while married to someone else renders the engagement void, as it is against good morals. The unaware party may bring an action against the guilty party.

Terminating an engagement constitutes a breach of promise. Public policy considerations encourage our courts to recognise it as such and to act accordingly. The Supreme Court of Appeal has given some guidance to courts faced with claims resulting from a termination of engagement.

A breach of promise may give rise to either of two distinct courses of action:


When people promise to marry each other, they do not contemplate that a breach of their engagement will have financial consequences similar to those of a divorce. When terminating an engagement, one has to distinguish between claims for prospective losses and those for actual losses.