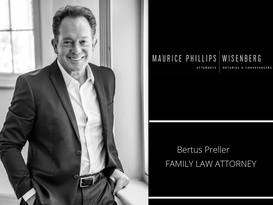 Where to divorce if you live in South Africa?

If you are an international expat residing in South Africa and you are contemplating divorcing from your spouse, you will be asking yourself where to start and exactly what law will apply to you. One may perhaps presume that you must institute divorce in the country in in which you were married, then again this is not the case.

Using the Family Laws in South Africa to Resolve Disputes

Occasionally, foreign expats residing in South Africa may not have jurisdiction to divorce in their country of origin, or they may perhaps be advised that divorcing in South Africa will result to a much more favourable financial result. For those expats contemplating divorce in South Africa, it is crucial to mention that financial claims might be made in their country of origin after a divorce in South Africa. In England for example a spouse may after a divorce abroad under Part III Matrimonial and Family Proceedings Act 1984 institute financial claims in England. When deciding on a divorce abroad, thorough guidance should be obtained concerning the possible claims that can be made in other countries, so that the best protective steps can be taken.

Grounds for divorce in South Africa:

In terms of South African law as it currently stands (unless there is a constitutional challenge in future), the husband’s domicile as at the date of marriage decides which laws will govern and decide the proprietary consequences of the marriage. By way of example, if the husband was domiciled say in England at the date of spouse's marriage, a South African court will apply English law and will determine the proprietary consequences of the marriage according to English law. The South African court process is followed but maintenance/support in respect of the other spouse or in respect of children are dealt with in terms of South African family law. If such a case proceeds to trial in a contested matter a South Africann court will draw on expert evidence as to what an English courts would do with regard to a division of assets, and the South African court would make a decision based on English law.

In cases where the husband was domiciled in South Africa at the time of marriage and married a British wife South African law will govern and decide the proprietary outcomes of the marriage.

As opposed to in England, the divorce process is not a peace meal process. All the claims, regardless of whether they are financial or child related must be dealt with in the divorce itself. However, a South African court will usually only have jurisdiction in respect of minor children (below 18 years) if they are residing in South Africa, unless of course an agreement is arived at between the parents  in respect of the children’s care and contact arrangements and the parties are merely requesting the court for an order to mirror this.

The Children’s Act 38 of 2005 regulate all children arrangements (those 18 and under), in which the best interests of the child are always paramount. Married moms and dads have both automatic and full parental responsibilities and rights.  A mother or father may be awarded primary or shared residence of the minor children, with definite contact rights. In addition both parents have a responsibility to maintain their children financially in accordance with their respective means.

It is significant to note that both parents’ permission is needed for the removal of any minor children from South Africa, regardless of whether for a holiday or permanent.  If one parent declines to consent, a court application must be made to the High Court for authorization, even if it is just for a vacation. In the event a parent removes a child without having the consent of the other parent or order of the High Court, it may constitute ‘child abduction’. South Africa is also signatory to the Hague Convention on child abduction. Consequently if an expat mother or father relocates with the child to another Hague signatory country (like France, Germany, England or the US), without having the permission of the other parent or the court, the parent who did not consent could seek orders for the child’s instantaneous return to South Africa.

Options for South African expats who are living in foreign countries

Under community of property, the husband and wife has a single joint estate, so that they become each joint owners of all the the assets and debts, regardless of whether it was acquired prior to the marriage or during the course of the marriage. Therefore, on divorce, there will be an equal division of the joint estate, except if a forfeiture of benefits is ordered under certain tight conditions. If parties are married in community of property, creditors can sue both of them for any debts, even if incurred by only one spouse.

In the event a couple do not wish to share each other’s assets and debts to any extent on divorce, they must indicate in the ante-nuptial contract that they want to be married out of community with no accrual system.

Apart from the proprietary consequences of the marriage, in specific circumstances a husband or wife can apply for spousal maintenance if they are divorcing in South Africa, and this will be determined in conformity with South African law, irrespective of the husband’s domicile at the time of marriage.

Regardless of whether you are an expat living in South Africa, or a South African expat living in a foreign country, mindful consideration should be given as to where will be the better jurisdiction to start divorce proceedings.  Jurisdiction is complicated, and the incorrect guidance can contribute to expensive disputes and unneeded litigation.
Contact a Lawyer