specialists in the fiels of family law and divorce
contact 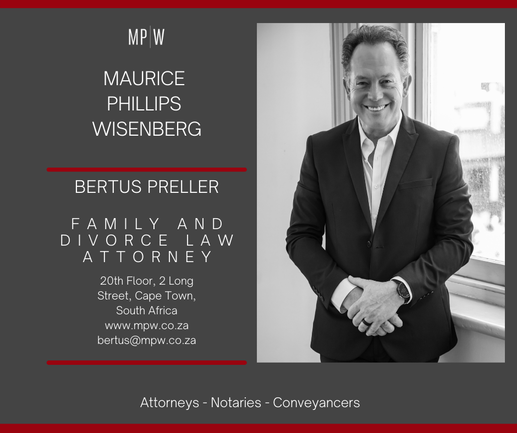 Bertus Preller is the author of Everyone's Guide to Divorce and Separation, published by Random House Penguin. He had been voted Family Lawyer of the year in South Africa by the ACQ5 Finance magazine in 2015. He is a seasoned Mediator, Family and Divorce Law Attorney and is the head of the Family and Divorce Law department at the law firm Maurice Phillips Wisenberg in Cape Town.

He is also a member of the Reunite International Child Abduction Centre, known as the leading UK charity offering expert services in international parental child abduction and the movement of children across international borders and IACP the International Academy of Collaborative Professionals, an international community of legal, mental health and financial professionals working in concert to create client-centred processes for resolving conflict. In addition he is also a member of MSI Global Alliance (MSI) which has a successful track record of over 30 years, through its global association of over 260 independent legal firms in more than 100 countries.

Bertus matriculated at the prestigious boys' school Grey College in Bloemfontein, a school known for cultivating numerous talented jurists, such as Bram Fischer a South African lawyer who defended Nelson Mandela at the Rivonia Trial, Ian Small-Smith and Ulrich Roux Criminal Defense Lawyers and numerous Judges of the High Court and Supreme Court of Appeal to mention but a few.

He has more than 30 years of experience in law and  became a Mediator and Arbitrator during 1996 when he was appointed as a Part-time Commissioner at the CCMA and he also acted as an Appeal's authority for the South African Police services in the late 90's.

Bertus acted in a number of high profile cases  in Family Law and Divorce Law and attends to divorce and family law cases across South Africa.

Some notable cases and articles where Bertus appeared were:
​
He has also been contributed on Family Law issues in numerous newspapers such as the Sunday Times and Business Times and publications such as Noseweek, Keur, Living and Loving, Longevity, Woman and Home, Women's Health, You, Huisgenoot and Fairlady and also made appearances on national television and on radio and broadcasting shows on 5FM, Cliffcentral, 702, Cape Talk, RSG to name a few.

His areas of expertise are inter alia: